This is what woke me up at five past six this morning. Five past six on a Monday morning? Why you must be thinking I was going to work, nope I was off on a twitch! I got up earlier and easier than I would have done for work and headed down to the train station.

The magical metal box, transported me to the seaside town of Filey. Which I have decided is currently number one in the region for inbreds day outing closing beating Scarborough and Bridlington. My aim for the for the day was a lifer in the form of a Surf Scoter. If you’re not sure what a surf scoter is, well neither am I. It’s either the second more freakish duck after a Muscovy (which even a vegan would kick to death they’re so ugly) or one of the finest looking ducks in the land (possibly top 5). It’s either a thing of magnificent or an ugly bastard, I just can’t decided! Anyway it’s a bit lost as it’s normally found in Canada and America. He (as with all ducks the handsomer bastard is always male except goosander which are equally as delightful) has tagged on to a group of common scoters hoping they won’t reject their American cousin for looking so peculiar.

I made my way up to the Brigg, during my journey I stopped off at Tesco. Outside was a dog crying for it’s owner. I stroked and comforted it until the old lady came out. I’m a modern day saint really! Despite spending most of the weekend really close to the Brigg fishing activity in the bay made sure the raft of scoters were out in the distance. A fellow birder informed me of the rough location of the scoters and I managed to pick up the white of the back of it’s neck through my scope. Well a tiny black dot with a bit of white on it. Very disappointing lifer! I hung around the Brigg a bit longer and managed to get some much needed year ticks; Sand Martin, Gannet, Meadow Pipit, Puffin, Razorbill, Guillemot and kittiwake.

I tried various points of the Brigg and cliff tops, helping out other birders to locate the scoters. I eventually made it down to the seafront and at the end of the promenade I set up my scope, was joined by two others and we eventually located the scoters and I hung on until I managed to get a goodish view of that ridiculous bill that makes a shoveler look normal. A couple of sandwich terns past over head which was my third lifer of the day. Happy with that I decided to head home. Sadly it was still too distant to photograph but James Spencer managed to grab one on his blog. 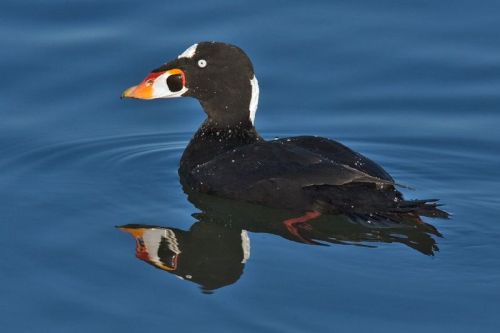 Not the Filey bird but stolen off Wikipedia

One response to “Surfin’ Bird”

CATCH THE TRADE WIND || A blog of dreams.

Nature is a Language - Can't You Read?

Smile! You’re at the best WordPress.com site ever

My gallery of bird paintings

Martin Deane: In his own write

Our adventure in restoration and natural history

A.W.Birder: Always on the lookout for fine birds...